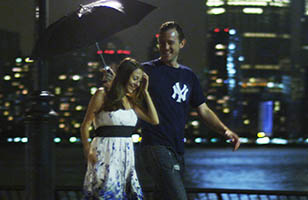 There are TWENTY MILLION PEOPLE in the greater New York City area.

Everybody's looking for somebody.

Brian doesn't believe in soul mates. Brian's best friend Edward, however, has the perfect girlfriend. After showing a cliché romantic comedy for "film night" at the Jersey City coffee shop where Brian works, everything gets turned upside down. Brian starts dating Ashley, a stand-up comedian and fellow cynic, and Edward's perfect girlfriend breaks up with him. Brian falls harder and harder for Ashley, but when she suddenly disappears without a trace, Brian enlists the help of his broken-hearted best friend and the imaginary characters from the cliché romantic comedy to find her, only to discover that her relationship status may be more complicated than it seemed. 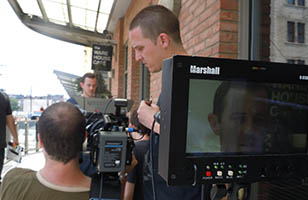 Twenty Million People is a contemporary take on the romantic comedy. In the 90's indie hit Swingers, we pondered how many days we were supposed to wait before we call. In Twenty Million People it's how many minutes should we wait before we text back, because you don't want it to seem like you were just standing here with the phone in your hand. And oh yeah, "everything you text has to have an exclamation point or it sounds sarcastic."

Twenty Million People was shot primarily in Jersey City, using the urban landscape of this up-and-coming artsy neighborhood, a stone's throw away from Manhattan, giving the film a "Woody Allen across the Hudson" vibe. The main characters travel from the "6th Borough" of Jersey City all the way to Brooklyn in the name of love, giving us a glimpse of what a modern-day romance is like in a city full of so many people.

The filmmakers have partnered with Factory Film Studios for the release of Twenty Million People, available soon on US/Canada cable VOD and digital platforms.

The film is being distributed by Factory Film Studio and will be coming to digital platforms and US/Canadian cable VOD, April 5th!

Ashley (Devin Sanchez) and Brian (Michael Ferrell) share a moment.
All images may be credited to Living Boy Productions